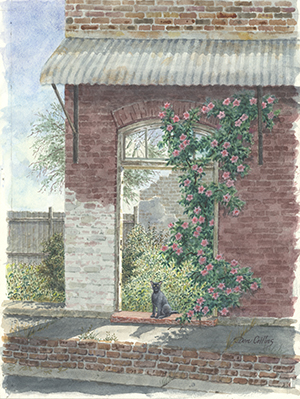 Born in Houston, Collins was reared on his family’s small ranch in north Texas during the heart of the great depression. His youth was almost idyllic, roaming freely through the woods and streams of the beautiful Trinity River valley.

Art was a compulsion from his earliest days, often to the detriment of his scholastic efforts! After several educational false starts, and military service during the Korean war, he yielded to his artistic urges and completed his formal education at UT Austin in 1956.

He immediately began a 52 year career as a freelance illustrator and graphic designer. Busy years followed, with a great variety of commercial clients, but in his early 40’s, painting became 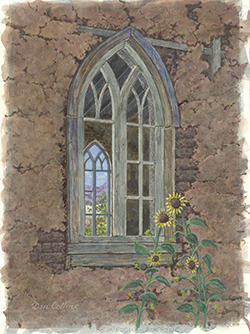 an important part of his work, and he participated in many prominent shows throughout the Southwest, as well as enjoying some gallery representation.

Collins’ eclectic subject matter reflects his rural upbringing, as well as impressions and experiences encountered in career of many decades.

Now painting and showing at a reduced pace, he still delights in hitting the back roads in search of new impressions to bring back to his easel and record….the compulsion still lingers!