Karen Alexander was raised in San Antonio and in her own words “escaped” as soon as possible to Austin in 1973, to attend UT. She started as an art major but got her degree in Anthropology because of her interest in Primitive Arts. Alexander comes from a long line of women who devoted much of their spare time in what was traditionally called “Women’s Crafts”. 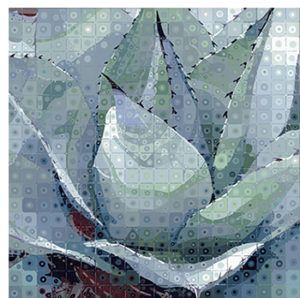 She says she had no choice but to learn needlework, yarn work and quilting at a young age. Much of this craft is based on a grid system and her current artwork is her modern interpretation of these principles. Alexander said that because there were no real jobs for people with Anthropology degrees, with a concentration in the Primitive Arts in the 1970’s, she took some drafting courses and became an Architectural Draftsman. Alexander shared that this was before CAD, when everything was hand drawn and this type of work relied heavily on the grid system, so her early training in that concept was reinforced.

The piece we have hanging in our stores this month is called “Bryce Canyon”. Alexander’s daughter, who is also an artist, took a trip to the parks in Utah and came back with some beautiful photographs. Alexander has always been interested in the natural world and most of her work is botanical. It is all about color, light and value for her. Lately, she has been drawn to the larger landscape and her daughter’s photos inspired her to dive into that larger world and made her want to explore the colors of the canyons. 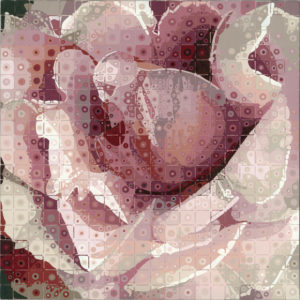 “I spent a lot of time at Miller Blueprint, when it was downtown, during the ’80’s! It has been wonderful to reconnect to Miller IDS and Dana does a fantastic job (she is a color guru) with the digital scans of my originals.”