Austin PBS and Austin City Limits celebrated another successful Hall of Fame inductee event, and the taping will air on December 27th and again on December 31st. Inductees are honored musicians who have played an important role in the ACL tapings’ history.

The performances this year were absolutely stellar! Lyle Lovett with his Large Band performed and Lyle was introduced by none other than his good friend, Sean Penn. Buddy Guy was fantastic and showed his true blues roots as he practically shimmied while he played his guitar. And how can you beat the history and voice of Shawn Colvin? Well, you add Robert Earl Keene as the MC, and put him on the stage with the gang for the finale. 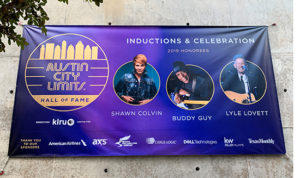 What does Miller have to do with such a fine event? Each year the goal of the Austin PBS Team is to bring a unique and special feel to Moody Theatre for the Hall of Fame Awards night. We were lucky enough to help provide graphic sparks to complement the wonder of the evening. From the outdoor vinyl banners greeting attendees as they arrived, to directional signage to parking and to the main events, we did it all Directional signage was everything from plastic A-Frame signs with corrugated plastic sign inserts, to foam core event signage on easels.  Once inside the venue, guests were greeted with various creative touches from personalized printed tablecloths to vinyl pole wraps celebrating each inductee as well as providing a listing for all hall of fame inductees. Magnetic table toppers graced high bar tables for the event. 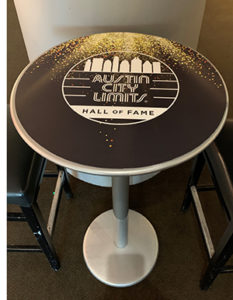 What other branded elements were there? The Hall of Fame logo was highlighted on custom pillows and table covers for the VIP lounge areas while cut vinyl decals clearly communicated the event on a multitude of glass doors and windows. Retractable banner stands represented each inductee visually on the mezzanine floor. 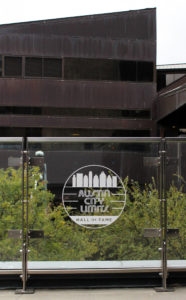 Colorful, clean, beautiful graphics are designed by the team at Austin PBS, each year sporting a new twist to their continued brand for Hall of Fame.

We love our friends at Austin PBS, and we love Austin City Limits for all it represents for the music industry. Here’s to a long future for the longest running live music show in the US. And thanks for letting us be a part of the festivities!