Austin has always been a colorful city that attracts artists from around the world. Every Month Miller IDS showcases Austin’s creative energy by highlighting a resident artist and their work. We love being a trusted resource for painters, illustrators, designers, and visual artists and, in turn, show our gratitude to the talented folks that keep returning for the highest-quality prints in the city. 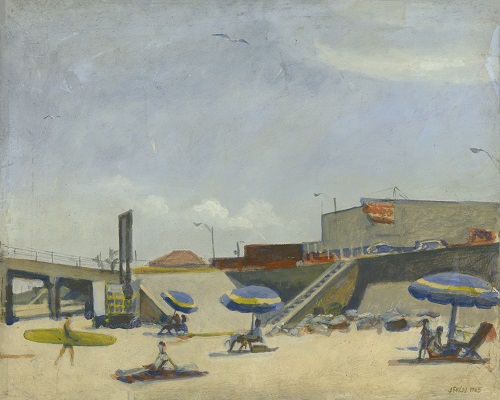 July 2016: This month, we’re happy to feature the work of Austin’s renowned artist, illustrator and underground cartoonist, Jim Franklin.
Born in Galveston, Jim studied at the San Francisco Art Institute and moved to New York before returning home to Texas. With other artists and musicians, he opened Austin’s iconic music hall, the Vulcan Gas Company. Gilbert Shelton created the venue’s first posters, then Jim took the job, drawing his first trademark armadillo, which soon evolved into the symbol and virtual folk hero of Texas hipsters. His art appeared regularly in Austin’s underground newspaper, The Rag and his own Armadillo Comics.
Ever creative, Jim is currently focusing on oil paintings, such as our featured “Galveston-1965” of a beach scene in his home town. This and more works may be seen on his website, http://jim-franklin-arts.myshopify.com/