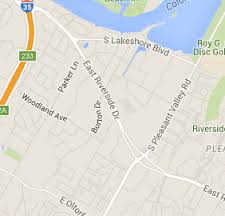 The rapidly gentrifying East Riverside Drive corridor presents tenants and homebuyers with a plethora of new housing options but the neighborhood has a significant drawback. There isn’t nearly enough retail to serve the mushrooming population.

Commercial real estate broker Jim Young, principal of Longbow Real Estate Group, has been studying the corridor on behalf of several clients and posted a blog on his website about the retail gap and potential investment opportunities.

Based on data culled from ESRI, a research company that is utilized by the Certified Commercial Investment Members professional organization to which Young belongs, the area shown in the accompanying map currently supports $284 million dollars of retail activity annually. The map shows the area within a five-minute drive of 2015 E. Riverside Drive, a retail strip center where Emo’s music venue is located and near the center of the development activity.

But the capacity of retailers within those parameters is only $191 million annually.

“When there is an unmet need, we call it a retail gap because money is leaking out of the trade area,” Young said. That gap is certain to grow, he added.

Hundreds of luxury apartments have opened in the past two years and single-family home communities also have delivered.

Nearby, the biggest game changer in recent history will occur when Oracle Corp. builds its 560,000-square-foot campus on the south shore of Lady Bird Lake just west of Pleasant Valley Drive. Some 1,000 employees are expected to be based there, and Oracle purchased an adjacent apartment building with the expectation of providing workforce housing.

Though an HEB Plus Grocery Co. store serves the area, the rest of the retail offerings tend toward fast food restaurants and smaller service providers. The need for more retail development is larger than expected, Young said.

“I’m really surprised by this gap, but East Riverside has changed so dramatically in the last five years both in population and resident income,” he said. “Clearly there’s a new income demographic for the area and it makes sense in hindsight that the retail gap is so large. Someone much smarter than me once said, ‘Retail follows rooftops.'”

Young said he hopes shedding light on the scarcity of retail in an area, which previously was a bulwark of student housing and lower-income households, will lead to more stores and restaurants.

“My hope is that retail and mixed-use developers with creative vision will look deeper at East Riverside Drive as an area to bring some major projects to Austin,” Young said. More information>>>