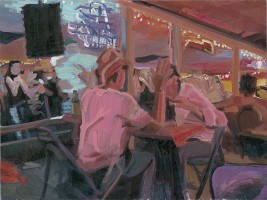 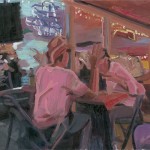 This month, our Featured Artist is Courtney Holder.  Courtney began oil painting at age 9, and it’s still her favorite medium, especially for personal pieces like our featured “Broken Spoke”. She believes “oils deliver a spectrum and depth of color and flexibility that’s hard to beat and that punch of color that really resonates with the neon colors and swirl of movement that permeate the music and dancing that takes center stage at places like the Broken Spoke”.

Courtney wants her paintings to tell a story – and this painting beautifully tells a story about a nostalgic place encrusted with emotions and memories that mean so much to generations of Austinites. The Spoke is one of the first places Courtney heard live music as a kid, and it’s where she later went boot scoot’n with her now husband. In her own words, “you may recognize some of the regulars in the painting; while the city grows with the new wave of hipsters and progressives, some Austin mainstays dig in their heels and refuse to change. When I drive by the Spoke on my way home, with all its character hanging out all over the place, and surrounded by shiny new towering apartments and lofts, all that rusted metal, dirt and neon glow the Spoke gives off just makes me smile. It’s good to see, that some stories never change.” You can enjoy more of Courtney’s artwork on her website.